CTK has been lucky enough to secure funding for a new sandpit area. This area will include a sandpit, outdoor kitchens and a playhouse. However to have this wonderful facility in our school we will need parent help in creating it. We will be holding a Working Bee on Saturday 8th and Sunday 9th May.

Please help us in any of the following ways – time, baking or tools/materials. Please email Mr Hadnett on principal@ctk.school.nz to register your interest.

Beginning of the Year Data

Our beginning of year data is looking fantastic and sets our students up to have outstanding academic year.

Please note that Friday 16th April is a Teacher Only Day. Teachers will all be involved in professional development on this day and will not be teaching classes.

Stations of the Cross

Last Thursday our students were involved in our Stations of the Cross. This year our senior students paired up with our junior students. They taught, discussed and read about each of the stations.

As well as this all our students have been involved in creating our own CTK Stations of the Cross based on the Meditations on the Way of the Cross by Suzanne Aubert. Miss Graham will have these completed and displayed around the school over the next year. Below is a preview. 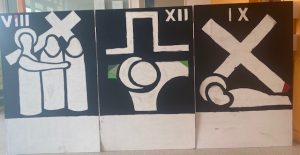 Before the game started, I was really nervous because I felt like I might have messed up, or I might have not gotten the ball a lot. But I still wanted to try out a new sport. We were going to play at the field at Memorial park. My school had three teams; Blue, Green, and Red. I was in team Green with John, Aden, Joseph, Jia, Vylet, Evie, and Fai. John, Aden, and Joseph were our captains. Miss Virginia was the teacher that stayed with our team throughout the day.

We had a break after the first game. Miss Virginia told us that we had to communicate with one another on what we should have done. After we talked for a bit during the break, we decided to all get into a circle and throw our rugby ball around in a circle. Next, it was time for the second game.

For the second game, we were up against Halsey

Drive School. According to Miss Virginia, we won the second game. I sort of felt like I didn’t really get the ball as much. Miss Virginia said that our energy for the second game was better than during the first game, and that we communicated more. During the break after the second round, the green team got into a circle, and did some stretches. After the stretches, we got our tags, and ran onto the field for the start of the third round.
For the third game, we played against Three Kings School. Some people on our team were not focused so the opposing team could easily go through gaps. A lot of people on our team were complaining about Three Kings School fending when our school had the chance of ripping their tags off. Near the end of the game, I had to swap with Vylot as a sub. After the third game, Miss Virginia told our team that we did not have a good setup on the field, there were a lot of gaps in our setup, and also we could re-fill our water bottles! This was a good thing for me since Aden didn’t bring his own water bottle so he drank most of my water. When we went to refill our water bottles, I met one of my old students at Christ the King. When we got back from refilling our water bottles, we practiced on our setup on the field. When we were done with practicing, it was time for the fourth round. Apparently we got a tie with the other team.

On the fourth game, we were versing Marshall Laing Primary School. People were still complaining about the other team fending. While we were playing, John ripped off someone’s entire belt For a lot of this game, I was a sub so I sat close to our bags. At the end of the game, we gave over the tags to the referee, and we had a break. Our teacher, Miss Virginia, said that we needed to communicate more, also that the only voice she could really hear was Jia. When we finished talking, we passed the ball around some more. Now it was time for the fifth game.

During the fifth game, we played against May Road School. I felt like this game was pretty good but some of our team were still complaining about people fending. For a couple of minutes, I was sub. I was pretty surprised when I heard we lost this game. After this round, we went over to the Blue and Red teams and their teachers. We had lunch with them, and one of the kids on the Red team had a sister that brought their dog. After having lunch at Memorial park, we got onto the school van, and when back to school.

Overall, I have to say that it was fun trying out a new sport because I wasn’t very athletic last year. My favourite part of the day was when I saw my old friend at the tournament. I would like to do something like this again. One of the hardest parts about playing Rippa Rugby would be when we had to rip the opposing teams tags off.

The last few weeks have been very active for our learners. Our seniors have been competing in Zone Softball tournaments. Our Y4-6 students played at the Zone Rippa Rugby Zone tournament yesterday. There has been some great Maths discussion and learning and sharing. Room 6 baked some lovely and very delicious hot cross buns for Easter. We also had shared reading of the Stations of the Cross with our buddy classes! Great to see tuakana teina amongst our senior and junior students sharing together! So much has happened over the last two weeks!

Board of Trustees Update

This week we held our second Board of Trustees meeting for the year, below are some of the highlights:

As a Board we would like to thank the staff, students and community for yet another great term and look forward to more exciting opportunities in Term 2.

If you are unaware of our school Facebook page please use this link so you can follow our school and receive notifications and reminders from Mr Hadnett. https://www.facebook.com/Christ-the-King-Catholic-School-Owairaka-578720132174619/ We put as many updoming events in the biweekly school newsletter as possible, but there are times when items pop up that require reminders or date changes.

This link https://www.ctk.school.nz/ will take you to our school website where you can find information regarding attendance dues, school start and end times, school uniform information and so much more. You can report your child(ren)’s absence using the button on the bottom left side of the page (Report An Absence) or phone the school office 626 7123 and use option 2.

Mrs Sullings has been able to secure an ex-professional basketball coach and a CTK grandparent to run FREE basketball session during Term 2.

We have only got 30 spaces avaiable – so be in quick.

Please register at the link below